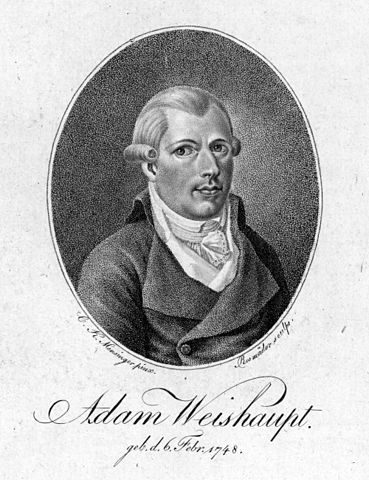 German educator, freemason and founder of the Order of Illuminati. Crowley considered him to be a Master of the Temple. Weishaupt was educated by the Jesuits, but later became their bitter enemy. He was given the position of professor of Canon Law at the University of Ingolstadt, Bavaria in 1775, and was the first non-ecclesiastic to hold that position.

Weishaupt’s humanistic system of Illuminism, and his Order of the Illuminati, emerged from a small group of anti-royalist, anti-clerical students Weishaupt had established at Ingolstadt. After he became a Freemason in 1777, he began to work towards incorporating his system of Illuminism into that of Masonry, with the aim of extending his social ideals throughout the world. For a time, the Illuminati exercised a considerable amount of influence, but ultimately ended in failure; largely due to vehement ecclesiastical persecution coupled with the incompetence of many of Weishaupt’s disciples.