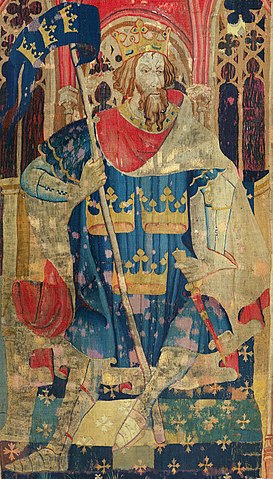 Semi-legendary Romano-British king, son of Uther Pendragon. Leader of the Knights of the Round Table. Arthur was the principal figure in a large number of medieval legends, histories and romances, including the Welsh poem Gododdin (c. 600 e.v.), the Historia Britonum of Nennius (c. 800 e.v.), the Annales Cambriae (c. 900 e.v.), the Historia Regum Britanniae of Geoffrey of Monmouth (1137 e.v.), Le Roman de Brut of Wace (1155 e.v.), the 12th century romances of Chrétien de Troyes, and the poem Sir Gawain and the Green Knight. These culminated in the epic poem Le Morte d’Arthur of Sir Thomas Mallory (1469), which is included in Section 2 of the A:. A:. reading list and which inspired most of the later works dealing with Arthur and his court at Camelot.

According to the legend, Arthur was a bastard son of King Uther Pendragon and Igraine, and was brought up as a page in Uther’s court under the tutelage of Merlin (q.v.). After having passed the test of removing the sword Excalibur from the stone in which it had been embedded, he assumed the throne of Britain and established his court at Camelot, or Caerleon. The adventures of his Knights of the Round Table, Lancelot, Galahad, Perceval or Parzival (q.v.), Bors, Gawain, Gareth, Kay, Bedivere and Tristram form an important part of European mythology, and those of Galahad, Perceval and Bors are centered around the quest for the Holy Grail.

Arthur was a just king, beloved by his subjects, but his rule was marred by the attacks of his sister, Morgan le Fay (Morgue la fée), and ultimately by the treachery of the three people closest to him, his queen Guenivere, his best friend Lancelot, and his nephew Modred or Mordred. He was mortally wounded in battle with Modred at Camlan, and was taken to the mythical island of Avalon (possibly the Isle of Man), there to be buried, or as some say, healed.