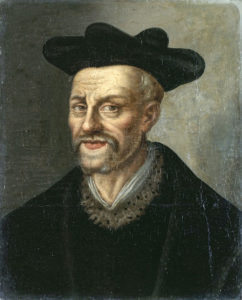 French Franciscan (later Benedictine) friar, classical scholar, physician, humanist and humorist, the author of the monumental, revolutionary satire Gargantua and Pantagruel, contemporary of Ulrich von Hutten and Paracelsus, and one of the greatest writers in the history of Europe. The works of Rabelais are included in Section 2 of the A:. A:. reading list.

Rabelais was born in Chinon, Touraine. When he was 17, his father, a lawyer, sent him to the Franciscan monastery at Fontenay-le-Comte. He found life under the stern and conservative Franciscans stifling, and the Franciscans took a dim view of his studies in Greek. He was befriended by the neighboring Bishop of Maillezais, Geoffroy d’Estissac, who assisted him to transfer to the somewhat more liberal Benedictine Order, but the monastic life was simply not suited for this inquisitive mind.

In 1530 e.v. he entered the medical school of Montpellier and took his baccalaureate in medicine within six weeks. He then began to practice medicine at the city hospital in Lyon. He performed one of the first public dissections in France, he also published a number of scientific works and popular romances.

Inspired, perhaps, by the success of some of the tall tales he had published, he wrote and published the Horribles et espouantables faicts et prouesses du tres renommé Pantagruel in 1532 e.v., under a pseudonym, “Alcofribas Nasier,” a simple anagram of his name. The book was full of impiety and criticism of established authority, and it was immediately condemned by the Sorbonne (the Faculty of Theology at Paris). He removed a few offensive terms and republished it, but only after publishing an even more stinging satire, Gargantua, in 1534. From then on, he was required to rely on the influence of his powerful friends to keep him out of the shadow of the stake.

Between 1534 and 1546, he travelled extensively with his benefactors, notably the brothers Jean and Guillaume du Bellay (respectively, the French ambassador to Rome and the French Governor of Piedmont), and he studied for his doctorate, which he obtained in 1537. During this time he also became attached to the Royal Court through the influence of his friends.

He published his “Third Book” and “Fourth Book” of the Gargantua & Pantagruel series in 1546 and 1552 e.v., respectively. Both were less bitingly satirical than the first two books, focusing more on philosophical issues and simple comedy; yet they were immediately condemned by the Sorbonne as containing heretical ideas, which they did. Two versions of a “Fifth Book” appeared after his death, and how much of this fifth book is actually attributable to Rabelais, if any, remains unknown.

The First Book, Gargantua, contains the story of the birth and upbringing of a giant child, Gargantua, and illustrates the authors views on bad education (Medieval) and good education (Renaissance), and how an ideal humanist leader should behave. The character of the battling monk, Friar Jean, is introduced, with graphically detailed anatomical descriptions of his feats of holy combat. For his services in war, Prince Gargantua rewards Friar Jean with an abbey of his own design, the “Abbey of Thélème,” whose inhabitants are called Thélèmites and whose motto is Fay ce que vouldra, “Do what thou wilt.” In constructing the foundations for the Abbey, a great bronze plate was found, inscribed with a long “Prophetic Riddle”, which ends with the following lines:

“Each man shall have what’s due to him by fate.
Such was the bargain. How praiseworthy he
Who shall have persevered even to the end!”

The Second Book, Pantagruel, which was actually written before Gargantua, deals with the incredible adventures of Gargantua’s son, Pantagruel. The character of the resourceful Panurge is introduced, who in many ways represents the author himself. The work satirically attacks the decadence and intellectual impoverishment of medieval Europe, and hails the approaching Renaissance.

The Third Book deals primarily with the efforts of Pantagruel & co. to find an answer to Panurge’s question, “Should I marry?” They seek the advice of a varied string of allegorical characters and groups, and examine the issues of economics and the status of women. All this proves inconclusive and they resort to consulting the “Oracle of the Bottle.”

In the Fourth Book, the companions set sail in search of the “Oracle of the Bottle.” On their way, they explore a number of strange islands populated by stranger beings, through which encounters the author satirically treats of numerous contemporary issues, particularly the controversy over Papal authority.

The Fifth Book continues the voyage of Pantagruel and his companions, and ends with their arrival at the Bacchic “Temple of the Bottle,” over whose door is inscribed the motto En Oino Aletheia, “In wine lies Truth.” The Priestess Bacbuc conducts them to the Divine Bottle to obtain the verdict, which is Trinc; interpreted as an invitation to drink at the well of knowledge (see Chapter 208 of Liber Aleph).