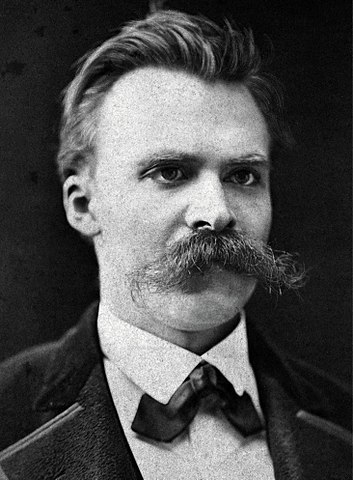 German poet, composer, classical scholar and philosopher. Famed for development of the idea of the “Superman,” the individual who exceeds the limitations set by cultural norms, and for his theory of civilization as resulting from the conflict and resolution of two human tendencies: the Apollonian, representing the rational desire for order; and the Dionysian, representing the irrational desire for ecstasy.

Nietzsche was a close personal friend of Richard Wagner, and like Wagner, considered himself a disciple of Schopenhauer. Nietzsche regarded Wagner as his ideal of the artistic genius, and acted for a time as his chief propagandist and commentator. Wagner served as the model for Nietzsche’s idea of the Ubermensch or “superman.”

Nietzsche’s analysis of the history of western civilization led him to the conclusion that the highest values in religion, morals and philosophy had lost their power; hence his famous, and misunderstood, dictum “God is dead.” Nietzsche perceived that as these antiquated values were stripped away, the “will to power” would emerge as the natural force behind the development of the mind, the individual and society.

Nietzsche suffered a complete mental breakdown in 1889, possibly related to tertiary syphilis, from which he never recovered.