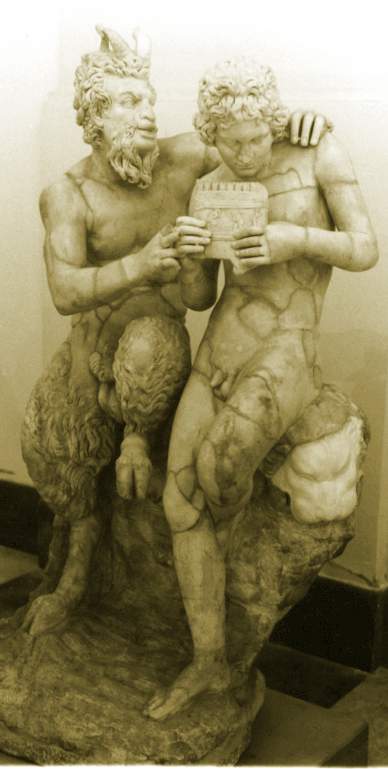 Also known as Aristaeus and Aigipan (goatherd), known in Roman mythology as Faunus or Sylvanus. Son of Hermês and Dryope (or Penelope). The Arkadian god of flocks and shepherds, of trees, forests and wildlife, of the hot noonday stillness, and of freedom and fertility. Playful, lascivious, unpredictable and lecherous, he is depicted as human, but with the ears, legs, hooves, tail, horns and beard of a goat. Some say he dwelt underground. He was fond of music, and is often shown bearing the syrinx, or pan-pipes (Syrinx was a wood nymph who fled Pan's lecherous advances by changing herself into a reed). The Orpheans associated Pan with Dionysus Zagreus. Herodotus places his birth (i.e., his appearance in Greece) at c. 1200 b.c.e., but some legends portray him as very ancient, even as the foster-brother of Zeus.

Pan was a solitary god who wandered among the heaths and woods, and dwelt on mountains and in caves. As a spirit of Nature, Pan could inspire terror, especially in solitary wanderers in the wilderness at night; this is the origin of our word “panic.”

In Greek, the word pan means “all,” and the Orpheans conceived of Pan as a symbol of the Universal, a personification of Nature; both Pangenetor, “all-begetter,” and Panphage, “all-devourer.” In this aspect he is portrayed in Tarot Trump XV.

Pan is also said to have seduced the nymph Echo, upon whom he sired Iynx, and the moon goddess Selênê, by transforming himself into a white ram and luring her into the forest. In a note he made in his personal copy of Liber XV, Crowley commented on the statement that the Priestess “should be actually Virgo Intacta or specially dedicated to the service of the Great Order.” His comment stated that the Priestess should be sworn to the Great Work “as Artemis to Pan.”

Plutarch (Obsolescence of Oracles) relates the story of how, during the reign of the Roman Emperor Tiberius (14-37 e.v.), the passengers of a merchant ship travelling from Greece to Italy heard a loud cry from the Isle of Paxos. The voice called the name of the ship's pilot, Thamus, three times, then instructed him to announce that the Great Pan was dead when the ship approached Palôdes. When he did as the voice had commanded, the passengers of the ship heard a great lamenting of many voices. Christian theologians have cited this story as an example of the triumph of Christianity over Paganism; but the passengers of the ship may simply have heard part of a mystery ritual of the Dying God Tammuz: “Tammuz, Tammuz, Tammuz the all-great is dead.”