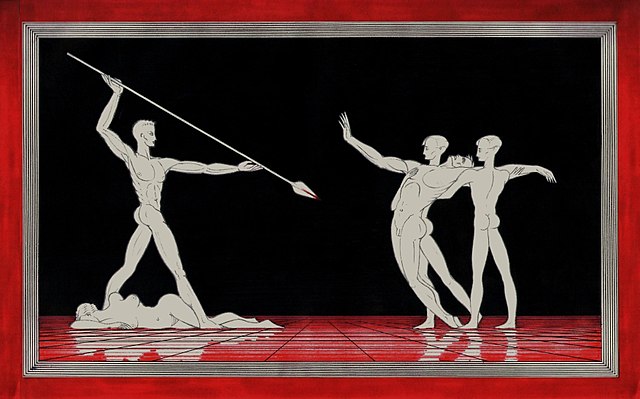 Also known as Percival, Parsifal, Percyvelle, and Perlesvaus, and Peredur. The medieval European hero of the Grail legends, who typifies the “Pure Fool” of ATU 0. פּארציואל = 418. The various Grail legends differ in their accounts of Perceval, but usually count him as one of Arthur’s knights of the round table.

The Graal-knight Gurnemanz and his esquires are praying in a forest near Montsalvat, the hidden Temple of the Graal, somewhere in the Pyrenees mountains between France and Spain. The disheveled Kundry runs in, bearing ointment for Amfortas, the wounded Graal-King. Amfortas is the son of Titurel, the founder of the Order of Graal Knights and the builder of the Graal Temple (Wolfram calls these knights Templeisen, which has lead many to identify them as the Knights Templar, although the Templar Order was not founded until 1118 e.v. Goodrich asserts that Wolfram himself was a Knight Templar). Amfortas is borne on a litter to a nearby lake to bathe, and Gurnemanz explains to his esquires that Amfortas was wounded by the sorcerer, Klingsor.

Klingsor had aspired to join the Graal Knights under Titurel, but he failed the test of purity and had been turned away. He retired to a lonely valley; and in an act of penance, and in hopes of being thus able to gain the Graal, he castrated himself. He then returned to appeal again to Titurel, but was scornfully repelled. Enraged, he turned to sorcery, and fashioned a pleasure garden filled with seductive “flower maidens,” with the purpose of enticing the Graal Knights, one by one, and thus to eventually take control of the Graal Castle himself. When Titurel empowered his son to take charge, Amfortas set out to destroy Klingsor; but he was met by Kundry, the Graal messenger, who distracted him with her charms. Klingsor took advantage of the situation to steal the sacred Lance and turn it upon Amfortas before escaping. Gurnemanz also explains that the Graal has instructed Amfortas through a vision that only the Lance which caused the wound can heal that wound, and that only the “Pure Fool” (der reine Tor), made wise through compassion, can regain the Lance and heal the wounded king.

Suddenly, a youth appears, in the custody of two other Graal-knights. He had been apprehended for carelessly shooting one of the sacred swans of Montsalvat with his bow and arrow. Gurnemanz reprimands and questions him. Parsifal stands confounded, having acted without understanding. He tells of his vague recollection of his mother, and their hut in the wilderness, and that he made the bow and arrows to shoot eagles. He remembers that he one day saw a troop of passing knights, and he left home to follow them. Kundry explains that the boy was raised a poor widow’s son. His mother Herzeleide (“Heart of Sorrow”) had raised him alone and in secret, after his father, Gamuret, had died in battle. She informs Parsifal that his mother died of a broken heart when he left her to follow the knights. Parsifal first attacks Kundry, then, stricken with guilt, collapses in a fit of trembling. Kundry retreats into the darkness, and falls asleep. When Parsifal recovers, he asks Gurnemanz, “Who is the Graal?” Gurnemanz, suspecting that this boy might be the “Pure Fool,” decides to take him before the Graal.

Gurnemanz takes him to the rocky cliffs adjacent to the forest, where they pass through a door in the rock, thence into the high-domed Graal Temple, there to witness the Feast of the Graal. Parsifal watches silently as Amfortas is brought in on his litter. Amfortas unveils the Graal, but its sight causes his wound to reopen. Gushing blood, Amfortas raises the luminous Graal in agony to bless the bread and wine. He collapses, and without himself partaking of the meal, he is returned to his litter and removed from the temple.

On seeing the Graal, Parsifal is expected to ask the ritual question, “Whom does the Graal serve?” but he stands mute. Gurnemanz asks him why he does not speak, and whether he understands what he has seen. He silently shakes his head, and Gurnemanz angrily dismisses him, calling him a mere fool.

Later, the sorcerer Klingsor is seated before his magic mirror in the keep of his castle, surrounded by the complex instruments of his sorcery. Observing the approach of Parsifal, he summons Kundry and commands her to seduce Parsifal. She refuses. Klingsor asserts his authority by virtue of his immunity to her charms. She mocks him, asking “are you chaste?” Klingsor rebukes her, and points out how handsome the approaching knight is, and that he may be the one to release her from her curse. Kundry relents and leaves to accomplish the task, brooding over her corruption of Amfortas long ago.

As Kundry leaves to make her preparations, Klingsor’s tower slowly sinks and disappears, revealing his Garden of Desire, inhabited by his illusory Flower Maidens. Parsifal finds himself in the Garden surrounded by these Maidens, who lament his having wounded their lovers, and attempt to entice him. Kundry appears and drives them away. She then begins to weave her erotic spell over Parsifal. She tells him the story of the love of his parents, the death of his father Kamuret, how Herzeleide tried to protect him from his father’s fate by sheltering him from the world, and how Herzeleide died of a broken heart when he left her. She offers her love to redeem him of the guilt of his mother’s death, and kisses him. Parsifal starts up in terror: he feels the pain of the Lance’s wound, and sees the Graal filled with blood. He comes to a realization of the nature of the wound of Amfortas, and the means whereby it must be healed. He falls to his knees in prayer, pushing Kundry away. He resolves to obtain the Lance and fulfill his destiny as Redeemer. Kundry recognizes this, and begs him to help her find her own salvation, to which he agrees if she will guide him back to the Graal Temple; but only after he has accomplished his mission. She finds this insult intolerable, and calls upon Klingsor to avenge her. Klingsor appears on the castle wall, and hurls the Lance at Parsifal. The Lance speeds toward Parsifal, but it miraculously comes to a halt in mid-air above him– he reaches up and takes it. He makes the sign of the cross with the Lance: Klingsor’s castle falls to ruins, and his magic garden withers to dust. Kundry swoons and collapses. Pausing only momentarily to look back at Kundry, Parsifal disappears into the wilderness.

Many years later, on Good Friday, the aged Gurnemanz, now a hermit dwelling in a hut by a sacred spring, the Fountain of Salvation, discovers Kundry in a stupor, lying in a thicket of brambles. He awakens her, and she offers service. She begins to fetch water from the spring, but she catches sight of a Knight approaching: he is clad in black armor with the visor closed, and he bears a spear.

Gurnemanz reproves the stranger for bearing a weapon on Good Friday. The stranger thrusts the spear upright in the ground, removes his armor, and kneels in silent prayer before the spear. Gurnemanz and Kundry suddenly recognize him as Parsifal, and the spear as the sacred Lance. Joyous greetings are exchanged, but then Gurnemanz informs Parsifal that, in his absence, the suffering of Amfortas had increased terribly; and that because Amfortas no longer dared to unveil the Graal, Titurel had died and the Knights had been disbanded. Parsifal is overcome with grief over the disastrous results of his foolish wanderings, and collapses. They take him to the sacred spring, where they bathe his feet and sprinkle his breast with the holy water. He revives, and asks to be taken to Amfortas. Gurnemanz agrees, then sprinkles his head with holy water and anoints him with oil, proclaiming him the new Graal King. Parsifal then turns to Kundry and sprinkles her with holy water. She weeps, and Parsifal kisses her gently upon the brow. They vest him with the pure white mantle of the Graal Knights. He takes the Lance, and they lead him to the Graal Temple.

A Graal procession forms, the remaining Knights bear Titurel’s coffin followed by Amfortas on his litter. The Knights implore Amfortas to unveil the Graal one last time, but he cannot. In his agony, he tears his robe, exposing his wound, and demands that the Knights slay him. Solemnly, Parsifal approaches Amfortas and touches the Lance to his side. Immediately, the king is healed and freed from his suffering. Blood flows from the point of the Lance. Parsifal proceeds to the Altar of the Graal, and ascends. He unveils the Graal, removes it from its shrine, and kneels before it in prayer. The Graal begins to shine more brilliantly, and a beam of white light streams down upon it. A pure white dove descends the beam of light, and alights upon Parsifal’s head. Kundry falls lifeless at his feet. Amfortas and Gurnemanz kneel in homage, Parsifal grasps the Graal, and elevates it in blessing above the adoring Knights as the chorus sings, “Höchsten Heiles Wunder! Erlösung dem Erlöser!” (Highest holy wonder! The Redeemer is Redeemed!).

Frater Achad; The Chalice of Ecstasy, being a Magical and Qabalistic Interpretation of the Drama of Parzival, Yogi Publication Society, Chicago 1923

Matthews, John; The Grail: Quest for the Eternal, Crossroad, NY 1981

Also see this, this, and this.