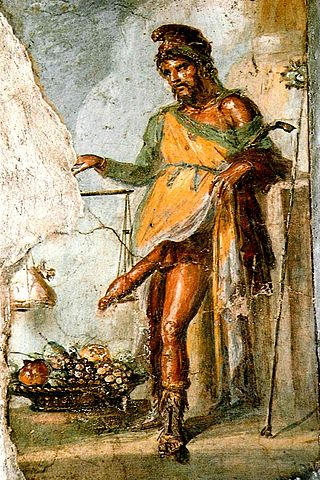 Also known as Lutinus, Fecundus and Mutunus. Son of Aphroditê and Dionysus (or Adonis, or Hermês, Pan, or Zeus, according to other accounts). The Mysian god of creative fertility in nature and in man; sometimes identified with both Hermês and Pan. He presided over the fertility of fields and flocks, bee-keeping, viticulture and fishing. By some accounts, he was included among the retinue of Dionysus.

Priapus is usually depicted as a grotesque little man with an unnaturally large phallus, not always erect, and a bucolic grin. In later Roman times, he was depicted simply as a phallus. His statue was often kept in gardens as a fertility talisman, and to scare away thieves. His sacred animal was the ass.

Knight, Richard Payne; “A Discourse on the Worship of Priapus” [1786] in Sexual Symbolism, a History of Phallic Worship, with an introduction by Ashley Montagu, Julian Press, NY 1957