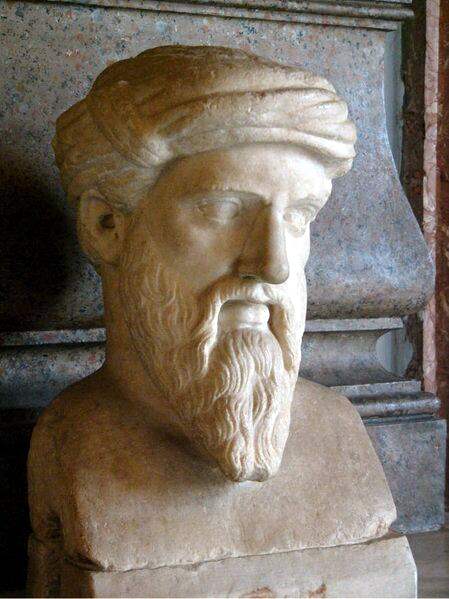 Added to the list of Saints in 1929/30 e.v. Greek philosopher, mathematician, astronomer, music theorist, initiate of the Orphic Mysteries and religious cult leader. See Part III of The Heart of the Master.

Pythagoras was born at Samos, the great-grandson of the philosopher Hippasos. In his studies, he travelled to Egypt, Phoenicia, Arabia and Babylonia. Some later writers state that he also travelled to India and Persia. In 530 b.c.e., he established a community of mystics at Crotona in southern Italy, which flourished until about the end of the 4th century b.c.e. Like most great teachers of antiquity (as well as many modern ones), his real history is clouded by fantastic legends.

Pythagoras is well-known for his discovery of the geometric theorem which bears his name, and which states that the square of the hypotenuse of any right triangle is equal to the sum of the squares of the other two sides. Pythagoras may have learned this theorem in Babylonia. The Pythagoreans are also credited with the discovery of irrational numbers.

The teachings of Pythagoras were influential on both the Gnostic and Neoplatonic movements. The Pythagorean doctrine sharply distinguishes between thought and sense, soul and body, the mathematical form of things and their physical appearances. For the Pythagoreans, the Universe was mathematical harmony, and all phenomena were sensuous expressions of mathematical ratios. Their conception of God was as a supreme, intelligent and imperceptible spirit, pervading all Nature, and imbuing it with life. They believed in reincarnation of an immortal soul, and their system of ethics was based on the restoration of harmony out of the confusion of the senses. They recommended ascetic practices to engender the serenity and tranquility necessary to achieve perfect harmony.

Pythagorean teachings incorporated a complex symbolism based on numerical correspondences. The Pythagoreans spoke of the Universe as being composed of ten concentric spheres: the outermost was the Sphere of the Stars; then, moving inward, one sphere for each of the seven planets; then one sphere for the Earth; and the innermost sphere was of the “Anti-Earth” (Antichthon), composed of fire. Each sphere was thought to have its own particular vibration. The harmony of these vibrations was termed the “music of the spheres,” and music theory was thus an important element of the Pythagorean teachings. The badge of the Pythagoreans is said to have been the pentagram.