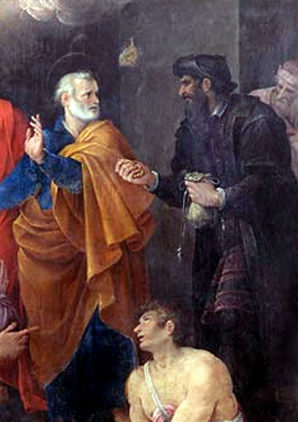 Samaritan founder of the Simonian sect of Gnostics, contemporary of the Apostles and of Philo Judaeus of Alexandria. Little is known of Simon or the Simonians, most of the information we have about him is from his enemies, and is probably highly distorted. They described him variously as a Christian, a Jew, a pagan and the founder of a new religion; a magician, a sorcerer, a religious philosopher and an arch-heretic; a pseudo-apostle, a pseudo-Messiah and a pretended incarnation of God; and the “father of all heresies.” Some of the early anti-Gnostic writers label Simon as the first of the Gnostics. This may be true; however, many modern scholars believe that Gnosticism significantly predates Simon, and there is even some disagreement over whether Simon can truly be considered a “Gnostic.” He may have been a pre-Christian religious teacher of a syncretized Judeo-Hellenic system, like Philo, who later engaged in a partial conversion to Christianity; he may have been influenced by Persian, Egyptian, Orphic and/or Pythagorean sources; but his precise identity and teachings remain unclear. There is some speculation that the various accounts of Simon Magus actually refer to two or more different individuals.

The following sketch of his life and teachings is compiled from a number of accounts, of varying credibility, by the early anti-Gnostic writers, and from the existing fragments of the Apophasis Megalê (“Great Announcement,” or “Great Exposition”) a Simonian document which was almost certainly written after Simon’s death but which purports to expound Simon’s true teachings. The only known fragments of this document were preserved by Hippolytus in his Philosophumena.

Simon was born in the Samarian town of Gitta to parents named Antonius and Rachel. He was brought up in the northern Egyptian city of Alexandria, where he was given a Greek education. He later became a disciple of John the Baptist (some say of Dositheus, a disciple of John the Baptist), whom he eventually succeeded. He gathered a large number of disciples, whom he was accustomed to lecture from beneath a plane tree. An account given in the New Testament (Acts 8:9-24) portrays Simon as attempting to purchase spiritual powers from the Apostles Peter and John– hence the term “simony.” (This anecdote is a good example of the distorted accounts of many of the early Gnostics: there is evidence that it was modified from a story about Paul which was originally written by the Ebionite sect of early Petrine Christians, an anti-Paulist group. Later, when the Ebionites were reconciled with the Paulists, the references to Paul were changed to Simon Magus, who, by that time, had no opportunity to defend himself.)

Simon’s cosmology, as best as can be reconstructed, included the axiom that Fire (corresponding to the Orphic Phanês), is the first principle of all things. This Fire, like Phanês, is bisexual, having both sexes within itself. Its male aspect was hidden, and its female aspect was manifested in the name Silence (corresponding to the Orphic Nux). The Cosmos came into being from the unbegotten Fire through Silence by means of six aspects of the Fire – six “Roots” or “Powers,” in three male-female polarities or syzygies (from syn, “together” and zygos, “yoke”): Nous (Mind), also called Dynamis (Power), and Ennoia (Thought); Phonê (Voice) and Onoma (Name); Logismos (Reason) and Enthymêsis (Reflection or Plan).

Nous-Ennoia divided from each other and became two separate beings, Nous and Ennoia, forming an infinite “Middle Space” between them. Ennoia beheld Nous from her individual point of view, and named his image Father (YHVH). This Father is “He who standeth, has stood, and shall stand.” The Father is, like the unbegotten Fire, androgynous, being the resultant of the image of Nous and the perception of Ennoia, and is sometimes referred to as the Mother-Father (Mêtropator). The Mother-Father in the Middle Space was manifested in six Aeons (Eternities) exactly paralleling the Roots of Fire. They are: Ouranos (Heaven) and Gê (Earth); Hêlios (Sun) and Selênê (Moon); and Aêr (Air) and Hydôr (Water). These Aeons were simultaneously considered as personalities, periods of time and places.

It was the Ennoia who, comprehending the will of the Father to create itself, descended to the lower regions, or the “third world,” and produced the “angels and lower authorities,” who then created the Cosmos after the model of the six Aeons. Ennoia then transported the Breath or Spirit (Pneuma) of the Father into the Cosmos to rule it, thus creating Primeval Man as the male-female image of the Father.

The angels and lower authorities, who did not know the Father, were unwilling to be looked upon as the progeny of any other being, and wished to rule the Cosmos themselves. Therefore, they divided the androgynous Primeval Man, who contained the Spirit of the Father, into two sexes. Through their desire to reunite, these male and female beings would only increase their separation by multiplying their number. They captured Ennoia and shut her up in a human body, forcing her to wander through the ages from one body to another on the wheel of generation.

Simon’s disciples allegedly revered him as an incarnation of the “Great Power of God,” i.e. of Nous, or the Boundless Power. They believed that the Boundless Power, beholding the crimes of the angels, had descended into the lower regions where he appeared as a man, though he was not a man. They believed that he had revealed himself as the Father to the Samaritans, and as the Son (Jesus) to the Jews. As the Son he suffered a docetic passion, i.e., in appearance only, for a true manifestation of divinity cannot truly suffer or die. In his current form, he offered salvation to his followers from angelic tyranny through his divine knowledge (Gnôsis), the knowledge of the Male-Female Mother-Father whose divided essence pervades all Humanity.

To the Simonians, the term “salvation” meant liberation from the tyranny of the angels, from the repetitive cycles of physical life. Since these cycles were perpetuated by desire, liberation could not be accomplished until desire had been extinguished. But the desire, which “makes the world go round,” is the desire of the incomplete soul to become whole by reuniting with its lost complement. Desire, therefore, could not be extinguished until it was fulfilled by the ecstatic reintegration of the male and female parts of the soul into a quintessential unity in one body.

While teaching in the Phoenician city of Tyre, the divine Simon beheld a courtesan on the roof of a brothel. Her name was Helena, and he recognized her immediately as the current incarnation of Ennoia, His First Thought, the Holy Spirit, the Mother of All. She was the Lost Sheep, forced by her progeny the angels to wander through the centuries from vessel to vessel (including that of Helen of Troy), until she ended up at the brothel in Tyre. He purchased her from her master and she became his constant companion during his travels and teachings. Their reunion represented the beginning of the redemption of the world, and was the model for the process of salvation to Simon’s followers.

In his wanderings with his disciples, Simon’s miracle-working and charisma allowed him to found a number of churches along the Palestinian-Syrian coastline from Caesaria (near the present day city of Hadera) to Antioch. However, he soon lost his churches to the more successful Peter, who followed in his footsteps. According to one rather questionable legend (which is nevertheless taken at face value by the Roman Catholic Church), Simon eventually ended up in Rome where he was defeated by the apostle Peter in magical combat. Simon allegedly flew into the air to demonstrate his power to the Emperor Nero, but Peter canceled his spell and brought him crashing to the ground. According to a more plausible account, he died peacefully among his followers in Antioch.

Simonian churches persisted until the time of Constantine, mainly in Syria, Phrygia, Egypt and Rome. Simon’s followers apparently divided themselves into two schools, one in Syria and one in Alexandria. The Syrian sect seems to have tended towards libertinism, engaged in magical practices, and worshipped Simon and Helena as gods in the traditional pagan sense, associating them with other notable male/female, solar/lunar pairs in religion and mythology, such as Zeus and Athena, and Shamash and Astarte. The Alexandrian sect was apparently of a more philosophic character, and may have influenced Basilides through the teachings of Menander and Satornilos.

Whether Simon was or was not the “Father of all Heresies,” Simonianism undoubtedly exerted considerable influence in the development of later Gnostic systems. All have made use of similar systems of aeonic emanations. Also, the story of Simon and Helena seems to be a precursor of the Sophia mythos of Valentinus and the writings of the Sethians and “Barbêlô Gnostics,” such as the Gospel of the Egyptians and the Trimorphic Protennoia (both from the Nag Hammadi Library), and the Pistis Sophia (which is included in Section 2 of the A:. A:. reading list); wherein the feminine First Emanation of the Supreme God, called variously Ennoia, Sophia, Barbêlô or Barbêlôn, brings forth the powers which create the world, becomes ensnared thereby, and is ultimately redeemed by the savior.