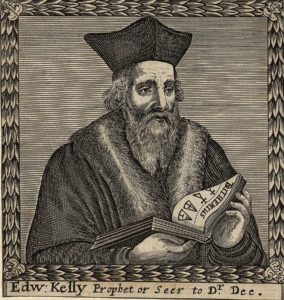 Irish alchemist and magician. Kelly is best known for his travels with John Dee and work his work for Dee as a “skryer” or visionary medium; but he was also a noted alchemist on his own right, publishing three alchemical works: The Stone of the Philosophers, The Humid Way, and The Theatre of Terrestrial Astronomy.

Kelly’s personality is somewhat of a mystery. He was born Edward Talbot in Worcester and attended Oxford for a few years, but did not obtain a degree. He seems to have practiced as a notary for a number of years in London or Lancaster. In Wales he appears to have chanced upon, under rather mysterious circumstances, the sole copy of The Book of Saint Dunstan, an alchemical treatise which explains how to formulate the Red and White Powders for the Transmutation of Metals, along with two ivory caskets containing samples of these powders. He is alleged to have used these powders to make gifts of gold for his friends; and to impress John Dee.

There is a poorly substantiated tradition that he wore his characteristic black skull cap to disguise the fact that his ears had been cut off for forgery. Most non-magician historians view him as a charlatan who took advantage of Dee’s credulity, leading him along with puzzling clues to arcane knowledge. And yet, Dee seems to have driven Kelly to the brink of insanity, forcing him to perform long skrying sessions on a nearly daily basis. Kelly expressed his fear and mistrust of the spirits on a number of occasions. In addition, the materials received in the workings was in an Angelic language, with its own unique grammar and syntax, some of it being remarkably consistent and betraying substantial knowledge and intelligence. It is written in a strange yet magnificent sort of prophetic poetry which possesses remarkable power and dark beauty.

In Chapter 187 of Liber Aleph, Crowley says that “an Angel did declare unto Kelly the very Axiomata of our Law of Thelema, in Good Measure, and plainly; but Dee, afflicted by the Fixity of his Tenets that were of the Slave-Gods, was wroth, and by his Authority prevailed upon the other, who was indeed not wholly perfected as an Instrument, or the World ready for that Sowing.”

The particular transmission to which Crowley probably refers is recorded in Dee’s diary for June 8, 1584. Dee states that the Spirits attempted to persuade Kelly:

That Jesus was not God.
That no prayer ought to be made to Jesus.
That there is no sin.
That mans soul doth go from one body to another childes quickening or animation.
That as many men and women as are now, have always been (…)
That the generation of mankind from Adam and Eve, is not an History, but a writing which has another sense.
No Holy Ghost they acknowledged.
They would not suffer him to pray to Jesus Christ; but would rebuke him, saying, that he robbed God of his honour, etc.

The cosmological system received by Dee and Kelly bears numerous resemblances to older Gnostic systems. Two late Gnostic works, the “Books of Ieou,” were attributed to the authorship of Enoch. The system of 30 Aethyrs developed by Dee and Kelly could easily be classified as a Gnostic aeonology. There are numerous other examples, one of the most striking is the following passage, obtained by Dee and Kelly on May 23, 1587:

I am the daughter of Fortitude, and ravished every hour, from my youth. For behold, I am Understanding, and Science dwelleth in me; and the heavens oppress me. They covet and desire me with infinite appetite; few or none that are earthly have embraced me, for I am shadowed with the Circle of the Stone, and covered with the morning Clouds. My feet are swifter than the winds, and my hands are sweeter than the morning dew. My garments are from the beginning, and my dwelling place is in my self. The Lion knoweth not where I walk, neither do the beasts of the field understand me. I am deflowered, and yet a virgin; I sanctify, and am not sanctified. Happy is he that embraceth me: for in the night season I am sweet, and in the day full of pleasure. My company is a harmony of many Cymbals, and my lips sweeter than health itself. I am a harlot for such as ravish me, and a virgin with such as know me not: For Lo, I am loved of many, and I am a lover to many; and as many as come unto me as they should do, have entertainment. Purge your streets, O ye sons of men, and wash your houses clean; make yourselves holy, and put on righteousness. Cast out your old strumpets, and burn their clothes; abstain from the company of other women that are defiled, that are sluttish, and not so handsome and beautiful as I, and then will I come and dwell amongst you: and behold, I will bring forth children unto you, and they shall be the sons of Comfort. I will open my garments, and stand naked before you, that your love may be more enflamed toward me. As yet, I walk in the clouds; as yet, I am carried with the winds, and cannot descend unto you for the multitude of your abominations, and the filthy loathsomeness of your dwelling places.

Whatever else he was, Kelly was, in one sense or another, inspired.

Kelly received knighthood at the hand of the Bohemian Emperor Rudolph II as a reward for his alchemical works (possibly as a result of the small quantities of the Red and White Tinctures which he possessed), but Rudolph later imprisoned him when he failed to deliver the quantities of alchemical gold he had promised. Kelly died while attempting to escape from prison.

Crowley considered Kelly to be one of his previous incarnations. See Chapters 73 and 187 of Liber Aleph and Part III of The Heart of the Master.

Casaubon, Meric; A True and Faithful Relation of What Passed for many Years Between Dr. John Dee and Some Spirits [London 1659], reprinted by Magical Childe Publishing Inc., New York 1992