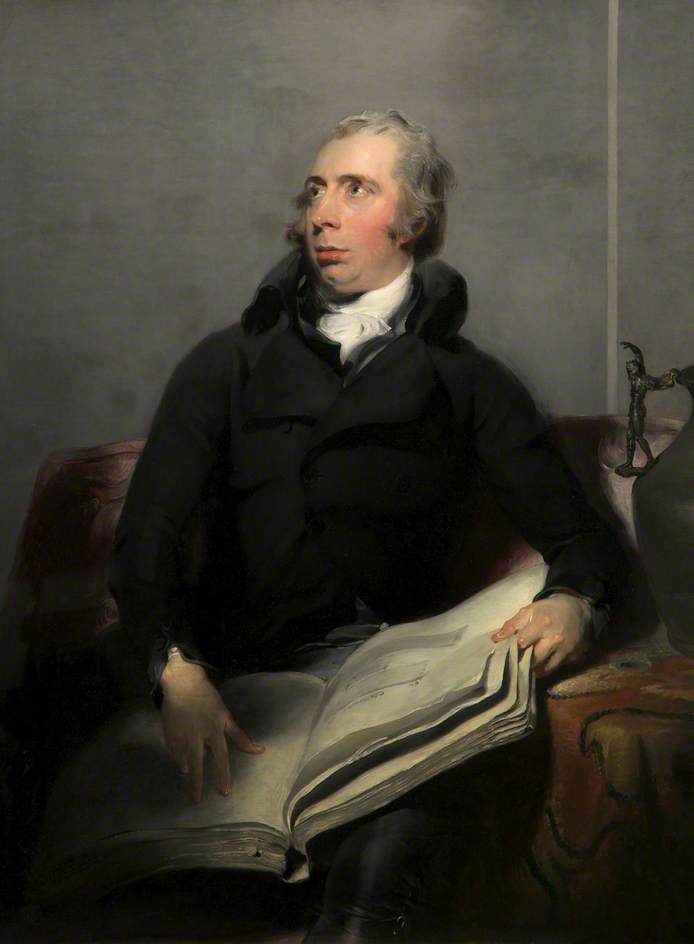 English antiquarian, philologist, numismatist, free-thinking Deist philosopher, expert on Greek literature, member of the Radical (Whig) Party of Parliament and the Society of Dilletanti, friend of Lord Byron, patron of art and learning, and country gentleman.

Knight was born at Wormsley Grange in Herefordshire to a parson, Thomas Knight, and his servant girl, Ursula Nash. He later fell heir to the fortunes of his grandfather, a wealthy ironmaster. He was sickly as a child and was educated largely by tutors and by himself. His wealth enabled him to travel extensively around the world, especially in Italy, and he developed a keen interest in ancient art. He was elected to Parliament in 1780 and was elected to the Society of Dilletanti in 1781. This Society, although founded as a club for cultured travellers (by Sir Francis Dashwood in 1732), became a prominent amateur archeological organization, and financed a number of archeological expeditions. It was under the auspices of the Society of Dilletanti that Knight’s Discourse on the Worship of Priapus was published in 1786.

This book, also published as Two Essays on the Worship of Priapus, is included in Section 1 of the A:. A:. reading list. By “the Worship of Priapus,” Knight did not mean specifically the cult of the Greek god discussed earlier, but phallic worship in general; including fertility cults. The book demonstrates in a scholarly manner the extensive and significant role phallic worship played in many and various parts of the ancient world, East as well as West, as told in the symbolic language of ancient mythology and art.

The metaphysical system set forth in the book is one of emanation. The Supreme God is a Quintessential, Male-Female Principle, embodying the principles of creation, destruction and renovation. The process of emanation takes place through a division of this “Intellectual Being” or “Fire” into two principles: active and passive, male and female, formative and solvent: the Divine Essence, or life force; and Universal Matter. All living beings are a result of the invigoration of the Universal Matter by the Divine Essence. Sexual intercourse could, then, be viewed as a sacred reflection of the divine Mystery of Emanation. Knight theorized that such a viewpoint was, indeed, that expressed in the sexual imagery and symbolism of the ancients– elements of which have survived and can still be seen even in the sacred art and architecture of modern times.

Knight’s other works include Analytical Essay on the Greek Alphabet (1791), Analytical Inquiry into the Principles of Taste (1805), Inquiry into the Symbolical Language of Ancient Art and Mythology (1818), two didactic poems: “The Landscape” (1794), and “The Progress of Civil Society” (1796), and “Alfred, a Romance in Rhyme” (1823). Knight’s extensive collection of ancient coins, medals, stone carvings and bronzes is now in the British Museum, of which he served as Trustee.

Knight, Richard Payne; “A Discourse on the Worship of Priapus” [1786] in Sexual Symbolism, a History of Phallic Worship, with an introduction by Ashley Montagu, Julian Press, NY 1957