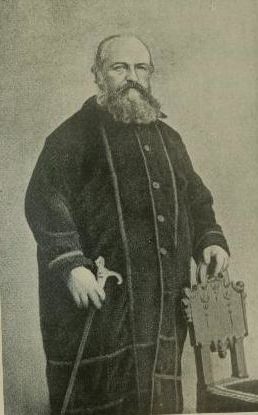 Usually known by his pseudonym “Eliphas Lévi Zahed,” which is a translation of his name into Hebrew, this Parisian was almost single-handedly responsible for the popular resurgence of the Secret Traditions in the 19th Century. Lévi synthesized Christianity, Judaism, Hinduism, Qabalism, Gnosticism, Masonry, Rosicrucianism, Alchemy, Tarot, Mesmerism, Spiritism, along with the writings of Boehme, Swedenborg, Paracelsus and Knorr von Rosenroth into what we know today as “occultism.”

Constant was born the son of a poor shoemaker in Paris. He attended a Catholic school for poor children, where he showed a great aptitude for religion. At 15, he entered the seminary of Saint Nicolas du Chardonnet to study for the priesthood, where he learned, among other religious matters, the Hebrew language. The master of this seminary, Abbé Frère-Colonna, taught the young Constant that humanity, fallen from the bosom of God through original sin, must return towards Him by a process which tears him away from matter and gradually spiritualizes him. He also taught the boy that history was divided into four great eras of progressively greater spiritualization: the first began with Adam; the second began with Abraham; the third began with Jesus; and the fourth was to begin with the advent of the Paraclete, the Holy Spirit. Abbé Frère was deposed for his views while Constant was still attending the seminary. Constant always remained faithful to the basic tenets of Catholicism, but he never forgave the Ecclesiastical authorities for disgracing his beloved teacher.

In 1832, he entered the theological college of Saint-Sulplice and was ordained Deacon in 1835. His years at Saint-Sulplice were dreary and disillusioning, as the students vied for the favor of the directors who manipulated and coerced them. He was scheduled to be ordained Priest in 1836, but he had met and fallen in love with a young girl. Although nothing ever came of the relationship, he realized that he could not live without human affection and abandoned his vows before his ordination. After hearing of his apostacy, his mother committed suicide.

After Saint-Sulplice, Constant spent a period associating with revolutionary socialists, including Flora Tristan, grandmother of Paul Gauguin and M. Ganneau, the “Mapah.” He spent three short terms in jail for his “seditious” writings. In 1846, he married Noémi Cadiot, who left him seven years later.

In 1852, Constant met the messianic mathematician Jozef Maria Hoëhne-Wronski (1778-1853), whose brilliant attempts at fusing philosophy, religion and mathematics provided Constant with the impetus towards synthesizing the disparate elements of his own life: Christianity, utopian idealism, mysticism and rationalism. This synthesis manifested as occultism, whose tenets Constant set forth in a treatise called Dogme de la magie, written under the pen name Eliphas Lévi. The treatise was later developed into Lévi’s most famous work, Dogme et rituel de la haute magie.

After Noémi had left him, he moved for a short time to England, where he met with Sir Edward Bulwer (later Lord) Lytton, and where he performed his famous evocation of Apollonius of Tyana. He returned to Paris, took on a number of pupils, and became increasingly famous and influential through his unique writings on philosophy and scientific theurgy, as well as his personal charm.

Aleister Crowley considered him to have been an Adeptus Major, as well as his own immediately previous incarnation. Crowley translated his La Clé des Grandes Mystéres (“The Key of the Mysteries” 1861), which Crowley considered to be his own Adeptus Exemptus thesis. Lévi’s Dogme et Rituel de la haute magie (1855-56 & 61, translated into English by A. E. Waite under the title “Transcendental Magic”) is included in the Liber E reading list and is required reading for entry to the probationer level of A:. A:.