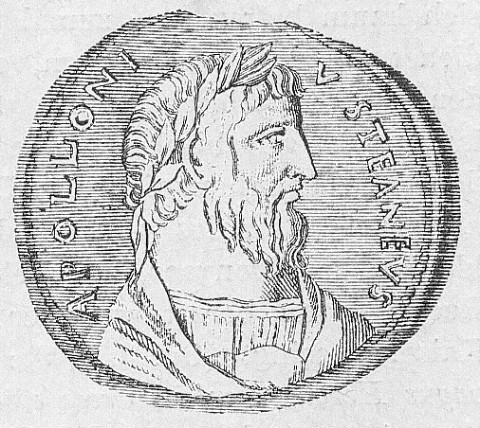 Also known as Apollon, and Apollonius of Tyana. Cappadocian philosopher of the Pythagorean school. See Part III of The Heart of the Master.

Born into the noble family of Tyana, Apollonius was educated by a Pythagorean philosopher in Tarsus. In his later youth, disgusted by the luxury, idleness and vice of Tarsus, he retired to the nearby village of Aegae, where he spent several years meditating in ascetic isolation. He then set out on what he regarded as his mission to learn, to heal, and to teach, throughout Asia Minor. He traveled to Assyria, Babylonia, Greece, Italy, Spain, Egypt and India, curing the sick and studying with the learned. He almost certainly was influenced by Jain teachers, then known as “Gymnosophists,” and may have been influenced by Buddhists as well. Later, he became an initiate of the Eleusinian Mysteries.

In his travels, he became well known as a man of the loftiest character, a gifted healer and charismatic spiritual leader. He developed a considerable following. Many fantastic legends of his feats of prophesy and miracle-working were recorded after his death, and he came to be regarded as a “divine being.” He is probably one of the models for the syncretistic figure of Christ, many anecdotes in the life story of Apollonius are duplicated in that of Jesus. No writings of Apollonius survive, but his detailed life story was assembled from the records of his friends and associates by the scholar Flavius Philostratus (172 – 250 e.v.) at the command of the emperor Severus.