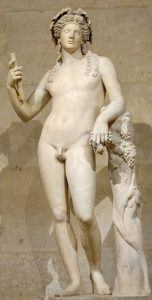 Also known as Bacchus, Iacchus, Bassareus, Trietenicus and Liber. Thracian god of ecstasy, terror, guilt and atonement, death and resurrection, vegetation, trees, wine, madness, and drama. Crowley thought Dionysus was “probably an ecstatic from the East,” and one of the principle models for the syncretic legend of Christ. Herodotus places the birth of Dionysus (i.e., his appearance in Greece) at c. 1600 b.c.e. See Krishna, Chapter 71 of Liber Aleph, Part III of The Heart of the Master, Chapter 7 of The Book of Lies, and The Book of Thoth, II:0. Both Dionysus and his father Zeus are closely associated with the earlier Phrygian deity named Sabazios.

In the Orphic theogony (which differs substantially from the more well-known cosmogony of Homer and Hesiod), Dionysus appears successively in three forms: Phanês-Dionysus, the bisexual god of Light, burst from the silver egg of the cosmos (the so-called Orphic Egg is sometimes depicted as an egg girt with a serpent) at the beginning of time. Phanês was also known by the names of Protogonos, Ericapaeus, Eros and Mêtis ( a name previously applied to the Titaness who presided over the planet Mercury). Alone, Phanês created a daughter, Nyx (Night), with whom he begot Gê or Gaia (Earth) and Ouranos or Uranus (Heaven). These begot the Fates, the Centimani, the Cyclôpes (who built the world), and the Titans, with their leader Cronus (Saturn). In the revolt of the Titans against Uranus, Cronus became ruler of the World, and begat the gods. The leader of the gods, Zeus, wrested rulership of the world from Cronus by eucharistically swallowing his great-grandfather Phanes (Metis), assimilating his power. Zeus then took the form of a serpent and begot the second Dionysus, Dionysus-Zagreus, the Horned Child, upon his daughter Persephonê.

Zeus bequeathed rulership of the world and the underworld upon his son while he was still a child, even setting him upon the great throne and letting him hold the lightening-bolt scepter. This aroused the envy of the Titans and of his wife, Hêra. Hêra bribed the guards whom Zeus had entrusted to protect the child (the Kourêtes), and distracted the child with toys and a looking glass. While Zagreus was beholding his own face in the looking glass, the Titans, ceremonially smeared with white gypsum, entered and attacked him, tearing him to pieces and devouring him. Enraged, Zeus destroyed the Titans with his thunderbolt, and from their ashes, commingled with those of Dionysus-Zagreus, arose the human race. Humans are therefore of a dual nature: the Dionysian divine nature imprisoned in the Titanic material nature.

Athena, goddess of Wisdom, had witnessed the murder of Dionysus-Zagreus and had even managed to save his heart from the rage of the Titans. She brought it, still beating, to her father Zeus. Zeus consumed the heart, as he had previously consumed the Serpent-entwined Egg of Light of his great-grandfather Phanês. He then came to Semelê, daughter of Cadmus (Semelê was the Thracian word for “Earth”) and begot upon her the third Dionysus, known as Dionysus-Lyseus or Bakkhos, or simply as Dionysus. [Another version of the legend has Athena preserving the heart of Zagreus within a small figure she fashioned from the gypsum of the Titans, into which she breathed life.] Dionysus was born on the winter solstice in a cavern in Mount Nusa (one theory of the origin of the name Dionysus derives the name from words meaning “God of Nusa”). Having been born twice, once as Zagreus and once as Lyseus, Dionysus is known as Dithyrambos, the “twice-born.”

Hêra, always jealous of her mate's numerous lovers and their children, disguised herself as Semelê's maidservant and convinced Semelê that she deserved to behold Zeus in his true splendor. The next time she saw him, Semelê tricked Zeus into swearing to grant her a wish; which was, of course, that he reveal his true form to her. He reluctantly complied, and she was instantly burned to ashes by the intolerable glory of his manifestation.

Zeus placed Dionysus in the care of the Nysaean Nymphs, who nurtured him through his childhood, and for which they were rewarded by Zeus by being placed among the stars as the Hyades. [Another version of the legend states that Zeus hid the child within his own thigh until the child had attained puberty; an alternative theory of the origin of the name Dionysus derives the name from Dios-nusos, “the nurseling of Zeus”.]

When fully grown, Dionysus discovered the methods of culturing the vine and extracting and fermenting its juice; but Hêra, ever jealous, struck him with madness and caused him to aimlessly wander the earth. Walking one day on the shore on an island in the Greek Archipelago, he was abducted by Tyrrhenian pirates, who mistook him for the son of a rich king and expected a heavy ransom. They carried him aboard their ship and attempted to bind him with ropes; but the knots untied themselves and the ropes fell to the deck. The sea around the ship turned to wine, and a vine began to grow up the mast. The god assumed the form of a lion or panther, and the pirates, in terror, leapt overboard and were transformed into dolphins.

In Phrygia, he was cured of his madness by the Great Mother Goddess, his grandmother Rhea (also known as Cybelê, Bona Dea and Magna Mater), who initiated him into her mysteries. He then set out to teach viticulture and to establish his cult among the peoples of the world.

He marched through Syria, Lebanon, Caucasian Iberia (modern Georgia), India, Egypt and Libya accompanied by a retinue of his votaries, dancing ecstatically and shouting the mystic word “euoi” (Latinized as the familiar “evoe”). His votaries included the female maenads or bacchantes, tattooed, clad in fox-skins and playing frame-drums or cymbals; the male satyrs, clad in panther-skins and bearing thyrsi (a thyrsus was a rod tipped with a pine cone, with streamers of ivy); and Silenus, his fat, aged, drunken companion and keeper, riding on an ass. Despite his slovenly appearance and his perpetual drunkenness, Silenus possessed immense knowledge and wisdom, and was greatly respected by the votaries of Dionysus.

The worship of Dionysus was savage and ecstatic, his votaries participated in orgia in which live animals (usually a spotted fawn, a goat, an ox or a bull) were torn apart and devoured raw. It was believed that the god entered the worshippers and possessed them through this Eucharist of living flesh, called the Omophagia. Animal skins and masks were worn, and a bull-roarer (rhombus) was used to simulate the thundering of Zeus.

As Dionysus and his retinue traveled the world spreading his cult, those who accepted him were rewarded with ecstasy. Those who opposed him were stricken with madness, and brought down by the hideous results of their own deranged atrocities. After establishing his cult across the known world, he returned to Greece, bringing his orgiastic Phrygian rites with him. He was not well received. Pentheus, king of Thebes, had him arrested, tried, scourged and thrown into prison. For this, Dionysus drove all the women of Thebes mad, including Agave, Pentheus's mother. They became maenads, and went out into the hills to conduct their Dionysian orgies. Pentheus imprudently followed them. Agave and her companions detected the spy, and in wild rage they fell upon him and tore him to pieces. Thus was Hellas converted to the religion of Dionysus; and Dionysus moved on.

On the island of Naxos, Dionysus discovered a girl weeping on the rocks. It was Ariadnê, the daughter of the Cretan king Minos, who had just been abandoned by Thêsêus. Dionysus fell in love with her; they wedded, and had many children.

Dionysus crowned his exploits by descending into the Underworld to recover his mother, Semelê. He took her to Olympus where she was ever after worshipped as Thyonê.

The ram, the dolphin, the serpent, the tiger, the lion, the lynx, the panther, the ox, the goat and the ass are sacred to Dionysus; and his symbols were the phallus, the bull and the thyrsus. According to Forlong, the Greek letters I.H.S. were carved over his shrine.

Robinson, Herbert Spencer and Knox Wilson; The Encyclopedia of Myths and Legends of All Nations, Kaye & Ward, London 1962